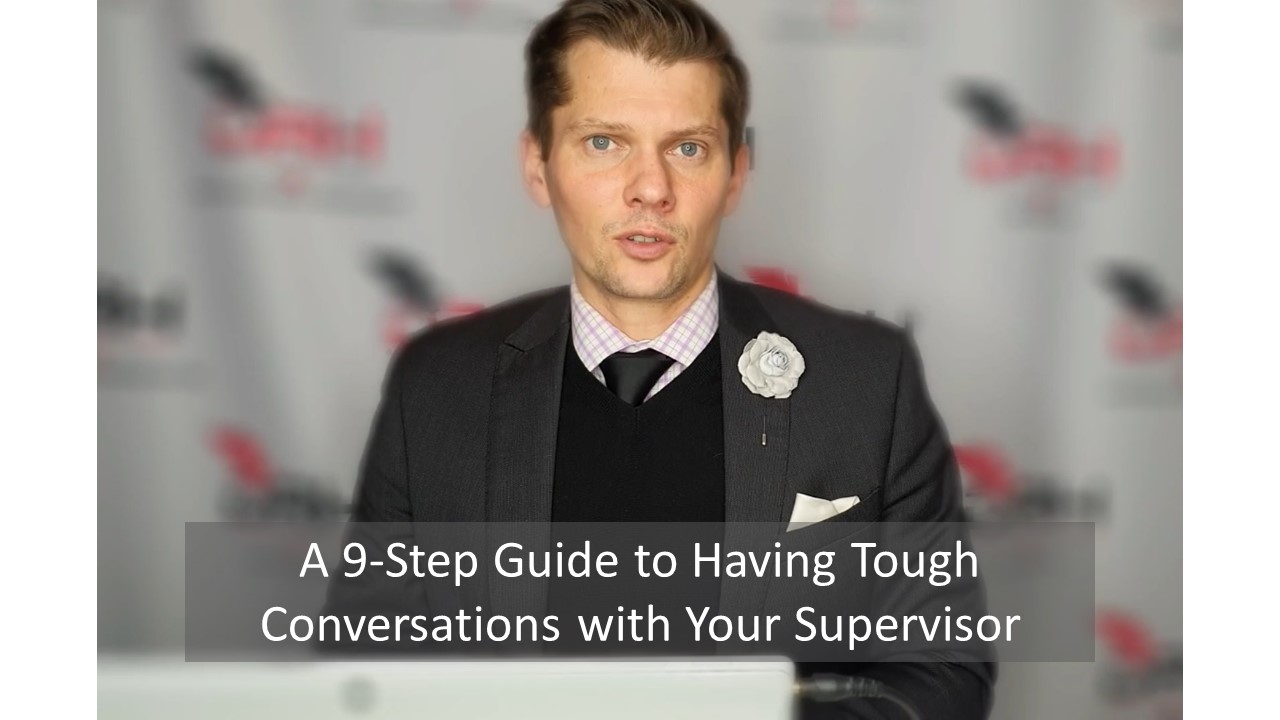 And these are just communication preferences. There’s all manner of other things that might come up. From experimental approaches, to career choices, to work preferences, and added to that, there is a massive power difference. With supervisors having a great deal of power over your PhD.

So, what’s a good way to have a tough conversation with your supervisor? Here’s a step-by-step process to make it easier. But remember, these are tough conversations for a reason. So, nothing I do, say or write will make them easy for you. All I can do is suggest things that might make the conversations less difficult.

Before we start. If you’re reading this and just beginning your PhD it is worth having a chat with your supervisor(s) about how you can have a tough conversation. You might even agree on rules or frameworks to follow. Such an approach will make any future tough conversation less tough.

To the best of your ability, don’t just talk about the problem/tough topic, try to find a solution. Or at least know the ideal version of that solution for you. Be as direct and as clear as you can be. Avoid euphemisms, and metaphors. Framing your concerns in the form “When you say/do/act [something], I feel [something].” is a good way to talk about tough topics. In general, that is better than saying “You make me feel [something].”.

Having a good set of “softening” introductions is useful. A metaphorical punch in the face – when you just blurt the tough topic out – is probably not the best way to tackle the topic. But you don’t want to dilute your message either.

So think about softening words “This might be hard for you to hear.”, “This is an emotional topic for me.”, “I’ve been practicing this conversation for a while.”, “Do you mind if raise a topic that is tough for me to talk about?”. And, if using the last one, make sure you get their answer! If they say no, then ask “When would be better?”. But, don’t let their “no” prevent you from having the discussion ever.

The best way is to ask a friend to help. Rehearsing and doing so with another person, will help with several parts of the process:

If you can’t rehearse, then write it all out. It might not be as effective as rehearsing, but it will help you articulate the problem, know your preferred solution, and consider your supervisors’ perspective.

You supervisors’ perspective is particularly important. They’ll have thoughts, wishes, and desires too. Take for example, chatting about leaving academia after your PhD or stopping your PhD altogether. Your supervisor chose you for their group. Or, at the very least said “yes” to you working under their supervision. In most cases, your supervisor has a longer term plan for you. They’ll have ideas on the work you’ll do as a student, and how that will translate into your work as an academic. Hearing you no longer want to be a PhD student or don’t want to become an academic could be a shock. And will probably change their plans and thinking of, for, and about you.

A tough conversation is not something you just pop out when you’re walking by their office. Nor is it something that should be handled via email. There are exceptions though – for example if they bring up the topic you want to cover, then that’s a great time to raise the tough topic. And don’t forget to mention that the issue is important to you. That way, they can prepare themselves and perhaps even suggest a different time, and place for the discussion to continue.

When you ask for the meeting, don’t say “Just 5 minutes.” when you know it will take longer. Ask for the time you need. If your supervisor asks why, you can be honest: “I’d like to have a chat about stuff that is important to me, and it might take some time.”

Avoid trying to resolve the issue or have the conversation via email. So much of what we say and mean can be lost in an email. If you MUST do it electronically, consider recording an audio or video clip. At the very least your tone, and expressions can be conveyed more effectively than in plain text.

And, if you’ve previously agreed on rules, framework or approaches for tough conversations, follow those.

Need to “chat” to your supervisor?

Book a meeting rather

than confronting them cold.

Step 5 – Make sure you’re happy with the setting.

Somewhere public might be better than their office or in the lab or field. But, then again, somewhere private might suit you better. Either way, try to get the location right. Bear in mind that some locations might be more or less triggering than others. For example, you might have already had difficult conversations in your office, or their office. Or they might always have tough conversations in a particular meeting room – and thus they might be more triggered in that room.

Hopefully you don’t need to have an independent third party. But before you say “Yes! I do.”, or “Nah, we’re right.” just have a think. What are the pros and cons. And, maybe having someone on call might be the best way to handle the need for someone independent. Your university should be able to provide someone. Don’t use a friend or colleague of yours or theirs. And definitely don’t use someone from within your research group/team.

Step 7 – Have the conversation.

Sometimes, when you get this far, you decide it is not necessary to have the chat. You organise everything, and then decide things are okay. Maybe you had a good week that week. Maybe they had a good week that week, and raised something similar with you. Not having the conversation will only mean things could flare up, and be worse later on. Have the conversation. If needed, take your notes into the session. Refer back to them.

Step 7b – Manage your emotions.

Tough conversations will be emotional. And, being emotional may be helpful in some cases, and a hinderance in others. So, do your best to keep your emotions in check. If your rehearsal was hard, the real thing will be harder. But you’ll be aware of when, and what will trigger your emotions – happy, sad, anger, etc. Thus, you can pre-empt those parts, the whole conversation in fact, with words such as “I might get emotional.” or “This is a tough conversation for me.” or “It is hard for me to say this out loud.”.

You’ve had the chat. And hopefully reached an agreement on what the next actions are. Towards the end or as you leave you might repeat them as you recall them. You should also say “Great, I’ll send that as an email to you.”. Then, go back to your desk, and send the email. That’ll be the record of the chat, and what you both agreed.

Repetitions will be necessary. It’s a tough conversation after all. You might need to revisit bits, refine bits or even start something entirely new. But each time you chat, it should make the conversation less tough (not easy, less tough). And the more practice you have at tough conversations, the better you’ll be at having them. Again, they won’t be easy, but they’ll be less tough.

Dr Richard Huysmans is the author of Connect the Docs: A Guide to getting industry partners for academics. He is passionate about PhD training and students getting the most out of an experience often designed with the supervisor in mind. Richard has helped more than 200 PhD students, early career researchers, and established academics build their careers. His clients appreciate his cut-through approach. He knows the sector and how make the most of a PhD.